(Disclaimer: These are my strategies and my opinions.  If I speak in absolutes or like an authority, it's just my style of writing.  There is no single strategy or approach to winning; these are mine.  I had good results last season and will try and update as I go this season  )

Hi, so this will be my DFS ramblings, and I will post results and my cash plays (50/the 50s, double-ups).  I am, for the first time, making GPP models and testing the water.  I will share some thoughts on the method, but sharing actual lineups would be devastating.  I also am very green when it comes to GPPs. And wouldn't want anyone investing based on my picks.

GPP - (guaranteed prize pool)  These are, or I will use the term as, basically all-tourney structures that have large prize pools, 10,000s or 100,000s of players, and a structured payout just like a poker tournament.  Unlike a cash game where the guy on the bubble and the guy in 1st make the same amount in a GPP prizes scale with performance.  In general, these only payout the top 20% of performers or less and usually are extremely top-heavy.

Exposure % - When you have multiple entries, how much a certain player, team, or stack appears.  If you have 3 lineups and Tom Brady is in all 3, he is at 100% exposure.  If he was only in one, he is at 33% exposure.  This is a scalable "all your eggs in one basket" metric.

Salary - In DFS, each player is priced by the site once and only once each week.  Once set and they are taking lineups, it can not change. You have a salary cap and work with this to construct a team.

"Super Value" - I made this up cause I dont know what else to use.  This occurs when the player's salary is super mismatched.  Unlike a sportsbook, a DFS site doesn't lose for being inaccurate. But super value occurs when something anomalous happens, which causes a player that was expected to get basically 0 touches or playtime to be all of a sudden the #1 one guy for a team.  This will be because of some development after the DFS site set a player's salary at something much lower than their new expectation.  These scenarios create a ton of value as they are priced very low, and their expected output has gone way up.

"Stack" - This is when you group players from the same team/game.   In general, this term is for stacking WR/TE(select pass-catching RBs) with your QBs, and they synergize.  QB throws get pts for yds, and the receiver gets pts for yards and reception (1ppr Draft Kings / 0.5 per Fantasy Duel); they both score points for a TD as well.  This is a key strategy in making big winning GPP lineups like you.

OPP. Def. - Each site will have you pick a defense.  Both sites have you pick a defense, and they start with 10 pts.  They can gain points through various means, but they lose points when someone scores against them.  As such, if your player scores a TD and you also have that defense, you will offset some of that gain from the offensive player's TD.  Many will say they have no players and the OPP. Def, but honestly, I think you can get away with some RBs paired with an Opp. Def, as their production can be great without scoring a single TD.  WRs, but mainly QBs, need TDs to be relevant, and I will never pair an OPP def with a QB and rarely with a WR.

So in 2020, I decided to try and be a little more strategic in my DFS and focus on the 50/the 50s as I thought I could beat them, and there would be less variance and degeneracy chasing 6 figure paydays.   Like poker, you are playing against other people, your mind/knowledge/research vs. theirs.  You have a house cut to overcome, and it is sizeable, no doubt, but I still thought it was beatable.

My 2020 results (Both cash and GPPs included)

My strategy was straightforward.  I drew up three lineups every week.

To be continued . . . . ALot of this is prob common knowledge, but I figured I would be thorough in my descriptions.

More specifics on Cash Strats and GPPs to follow.

Week 1 of GPP attempt.  11 lineups. Spread across 46 entries.  It is currently meaningless, but I think I can improve my models for making lineups, so I consider it at least encouraging moving forward.  I may be terrible and just lucky, won't know for a long time, but I was profitable in GPPs last season as well. 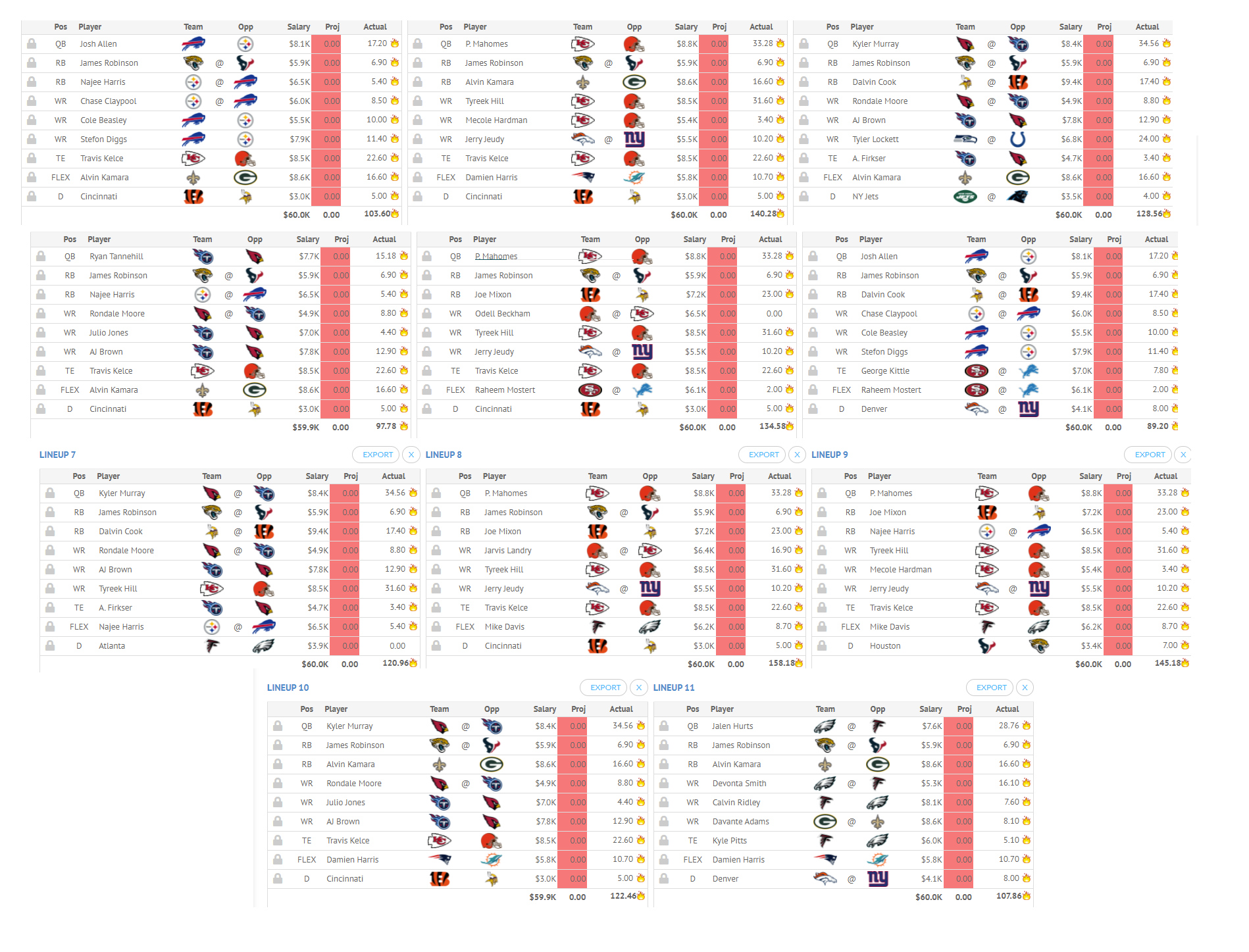 GPP exposures.  Alot of improvements to be done.  For example, my initial method appeared to overexpose Robinson but I like the underlying logic so and consider this learning rather than some sure thing so I went with it.  The reason for this is rather than one model I made multiple and then composited the results. So despite limiting the exposure per model the composite I made Robinson really exposed.  while having really good exposure everywhere else with only 3 other players being on more than half the rosters.

Finish writing up about cash game strats another time.  My 3 for this week are currently. May tweak later, Torn on zeke cause I really dont like him but i think he is priced well. Well see.

Trying to work, improve create, GPP models. Here are some baseline parameters I am using regardless of what week it is

I have also set up predicted ownership brackets.  Defense isn't included in these so it's for the other 8 slots.  GIves it leeway for 2 fighters to float around the first 4 brackets.  May tweak these week to week

I am trying to focus on team potential at every position/slot and the matchup games.  So this week I set specific team parameters.

Made a list of QBs I wanted.  As you can see above they will have at least one other TE/WR with them and an opposing receiver.

I added a specific rule for Mayfield that weighed his RB a little heavier if he was QB since they both get targets in the air.  THey are not in all his lineups but I made it more likely as normally it would be harder to get them in there.

Then I excluded some groups I didnt want it digging through

Exclusions are just the overall potential of the team at that position.  Based on vegas, matchups, predictions, etc.

I wanted a secondary stack in my games as well.  This is when you have 2 players in the same game on opposite teams but without one of their quarterbacks.  I picked two matchups for this.   For maybe 70% of my lineups, I had a requirement to have 1 player from each of those games.

I generated a lot of lineups this week with variations on these such as adding % variation to position and other things that change valuation of players and positions.  I wanted to see how various minor changes performed so I generated 320 lineups and made 320 entries this week(Actually 318 lineups as 2 repeated in the different runs)

Here are my exposure, or how much/ften someone appears in my lineups:

Note on D, I had originally set up a pool of Defenses to target but it broke something and would only give me Cleveland.  So I took it out at some point.  I forget exact list but I think it was to include one of these defenses:

I ma new to FanDuel so there are in  a category called, "No Experienced Players"  I think that is why they have a higher % of players payout but I was mainly looking for gigantic field to compare myself against.

This post was modified 1 month ago by McWaffle
ReplyQuote

Had to make some substitutions due to people not playing like Josh Jacobs.  Redid the whole thing.

Similar to above but rather than force a secondary stack of two opposing players w/o a quarterback I made a list of about 40 players that fit the criteria I wanted and then the players I would be willing to stack them with on the opposing team, I then increased the projections of those matched players so rather than forcing a stack it makes it more likely.

Criteria for these are games with high expected scores (vegas) and players that are well priced with upside higher ceilings.

As result i redid my entires.  I did 150 with various limits on my exposure and 150 with all exposure limits at 90%.  Meaning one player can be in 90% of lineups.  In essence less restricted version.