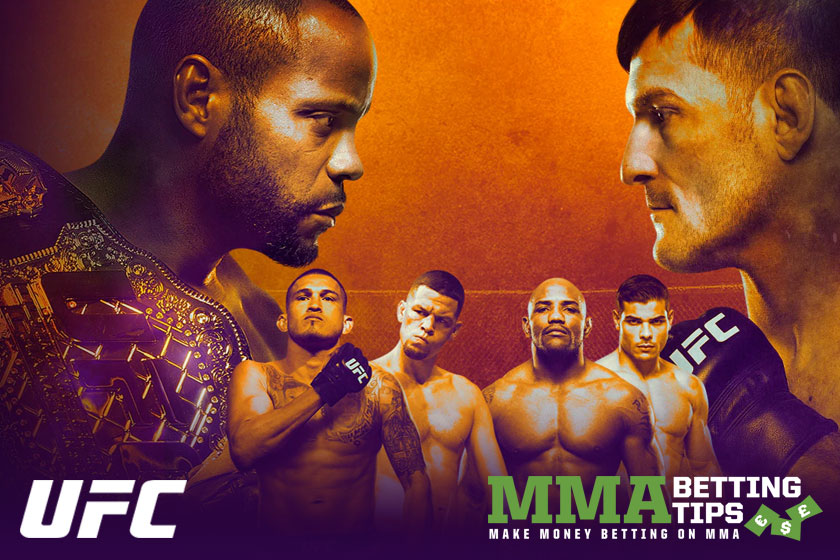 August has been a great month for us so far. We’re 3-0 on prefight bets, and we’re also consistently grinding out small profits in Live Betting.

Now we turn our attention to UFC 241, an event that potentially looks very good for both prefight and Live Betting.

Raphael Assuncao is a tough matchup for anyone in the UFC’s Bantamweight division, but I feel like Sandhagen has already beaten a more challenging stylistic opponent in John Lineker.

Sandhagen’s style revolves around playing the role of matador and picking his opponents apart with his excellent footwork and diverse range of strikes. John Lineker’s style tends to be Kryptonite for that kind of fighter because Lineker can walk through their shots, back them into a corner and blast them with power strikes. Sandhagen passed his test against Lineker with flying colours, which suggests that he’s going to do really good against Assuncao for a few reasons…

Raphael Assuncao and John Lineker have completely different styles of fighting, but they’ve both got a similar body type. Stylistically Lineker is a much more difficult problem for Sandhagen to solve. Sandhagen wants guys to stand right in the middle of the Octagon with him, so he can use his complex angles to pick them apart, and that’s exactly what Assuncao will do.

Historically Assuncao has always been a guy who has struggled to put his stamp on rounds. We saw this in his fight against Aljamain Sterling and his first fight against Marlon Moraes. In contrast, Sandhagen is relentless. He has the cardio to fight at an incredibly high pace for 15 minutes, and he’s constantly on the offensive and mixing things up with a wide range of attacks. It’s very difficult to outpoint a guy like this because he never stops working, we saw that in his last fight against John Lineker. Lineker has built a career off breaking people with his relentless pressure, and not even he could keep up with the pace that Sandhagen set.

I believe that this is a great stylistic matchup for Cory Sandhagen because the size difference is going to make it very difficult for Assuncao to use his most effective weapons. At 5 ft 11 Sandhagen should tower over Assuncao, who stands just 5 ft 6. Sandhagen will also have a 4-inch reach advantage. Sandhagen also does a great job of using his size to fight long.

Assuncao’s most dangerous weapon is his leg kicks, but the best counter to a leg kick is a punch in the face and Sandhagen’s ability to use his reach advantage to fight long, should take the threat of the leg kick away from Assuncao. Sandhagen is also great at using footwork to slip his opponents shots, which should make it even more difficult for Assuncao to land the leg kick repeatedly.

Assuncao’s second most dangerous weapon is his offensive wrestling and ground game, but Sandhagen has solid takedown defense and he’s very good at creating scrambles to work his way back to his feet. The size difference will also make it difficult for Assuncao to hold the bigger man down.

If you go back and watch Assuncao’s past fights, you’ll see that a lot of his shots fall short in Kickboxing range against opponents who are a similar size to him. Sandhagen is much bigger than anyone Assuncao has fought in a long time, and his footwork is also much better. I really feel like Assuncao is going to have a tough time landing in this fight.

I love Sandhagen in this fight because he’s the kind of guy that you need to knockout or knockdown in order to beat because the guy has no quit in him and he can sprint for 15 minutes without slowing down. He also has an unorthodox, tricky style that takes a while for his opponents to adjust to.

I feel like Sandhagen’s speed, size, and unorthodox technique is going to be too much for Assuncao to handle here. Assuncao struggles to put his stamp on rounds whereas Sandhagen is the complete opposite.

We also have to take into account that Sandhagen is still only 27 years old and making massive improvements from fight to fight. Lineker was a difficult test for him, and he’s bound to have learned a lot from that matchup. He’ll most likely look even better on Saturday night. In contrast, Assuncao is now 37 years old and will probably be declining from fight to fight. We also cannot ignore that he was brutally knocked down in his last fight against Marlon Moraes. That may have a negative impact on his performance this weekend and make him a little more gunshy than usual.

Reasons for betting on Cory Sandhagen

The bookies believe that Cory Sandhagen has a 61% chance of beating Raphael Assuncao based on their current odds.

I believe that Cory Sandhagen has a 70% chance of beating Raphael Assuncao based on my extensive research and analysis.

I did not think I would be betting on Nate Diaz this weekend, but I go into researching every fight with an open mind and just like with Veronica Macedo last weekend, I saw things studying this matchup that I did not expect to see.

Obviously, Nate Diaz is not a safe bet this weekend because he’s coming back off a 3 year layoff. But that’s ok here because we’re getting a good payoff in the odds to take on the risk of him potentially showing up and looking very rusty after being out for so long. The truth is nobody knows how Nate will look on Saturday night, but if anyone can come off the bench after a 3 year layoff and look exactly like they did before, it’s a guy like Diaz. It’s also reassuring listening to Chael Sonnen talk about the shape he feels Diaz is in right now:

Nate Diaz is a guy with a lot of flaws. He has bad striking defense, he cuts easily, he’s a slow starter, and he’s not that fast. He also has bad takedown defense and doesn’t check leg kicks. But to beat him you need to do 1 of 3 things. You need to either have the Boxing to back him up, the power to knock him out or the wrestling to take him down and control him on the ground…

If you go back and watch Pettis’ last few fights, you’ll see that all his striking is based on his kicks. He even admits to this in his fight week interview where he said “Nate is a puncher and I am a kicker”:

Generally speaking in that type of stylistic matchup the superior Boxer will win unless the kicker has incredible footwork, great cardio and an ability to land kicks while moving backward. Very few fighters possess this ability. Edson Barboza is perhaps the only guy I can think of who can outstrike high-level MMA Boxers using a kicks based style of fighting.

The reason why kickers have such a tough time with Boxers is that the best counter to a kick, is a punch in the face and it’s a lot easier to punch someone in the face than land a head kick.

If you go back and watch all of Pettis’ fights over the last few years, you’ll see that he doesn’t really have any Boxing and that is a big problem when you’re fighting a guy like Diaz. For Pettis to get the time and space he needs to get his kicks off, he’s going to have to back Diaz up, and without Boxing, he’s not going to be able to. Sure, he’ll probably chip away at Diaz’s lead leg with leg kicks, but he’ll probably eat a good few left crosses for his trouble, and I know what the judges are going to favour more.

Anthony Pettis has decent footwork, but he doesn’t have Edson Barboza type footwork where he can effectively land kicks while moving backward. Pettis still needs to plant his feet to get his kicks off, and in this range, Diaz will start to land his Boxing combinations. Stylistically, it’s a bit of a nightmare for Pettis.

His second path to victory would be to take Diaz down, but this is unlikely. I don’t see Pettis utilizing this strategy, and even if he does, Diaz is no picnic on the ground.

The third potential path to victory is for Pettis to win the fight by KO, and although Pettis is dangerous, we have to take into consideration the fact that Diaz has one of the best chins in the history of MMA. He has only been KO’d one time in 30 pro fights. Pettis has the power and technique to KO anyone on earth, but if he KO’d Diaz, it would be improbable.

We also have to remember that Pettis has quit in fights in the past, while Diaz is the type of guy who you have to kill in order to beat.

This is a risky bet because it’s never going to be easy for a fighter to come off the bench after a 3 year layoff and perform to their full potential, but if anyone can do it, it’s a Diaz brother. Stylistically this is a good matchup for Diaz, and I struggle to see how Pettis is going to be able to outpoint Diaz when he doesn’t have the Boxing to back him up. It’s very unlikely that Pettis will be able to land more kicks than Nate can land punches.

At underdog odds, I think Diaz is a really cheeky little bet that I like quite a lot. I didn’t expect to be betting Diaz this weekend, but now I’ve researched the fight I like it a lot.

Reasons for betting on Nate Diaz

The bookies believe that Nate Diaz has a 47% chance of beating Anthony Pettis based on their current odds.

I believe that Nate Diaz has a 60% chance of beating Anthony Pettis based on my extensive research and analysis.