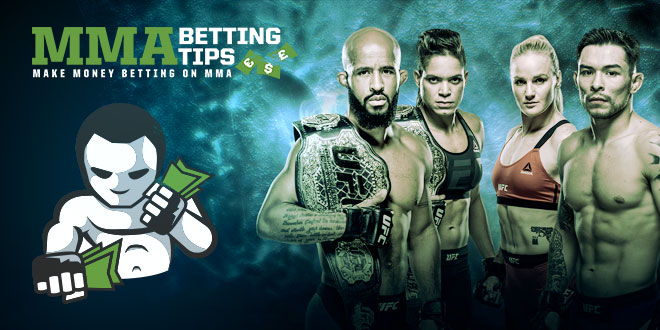 I’m really sorry that the betting tips for UFC 215 have been posted later in the week than usual. Normally I like to get at least one tip posted by the Wednesday before an event, but there were a few fighters competing at UFC 215 that I didn’t feel comfortable betting on until we could see how they looked at the weigh ins. Fortunately for us, one of the fighters I wanted to bet on looked great at the weigh ins, so it’s time to pull the trigger…

Don’t forget to keep checking this article regularly for updates because I may add more betting tips as we get closer to the time of the event.

DO NOT PLACE BETS ON ALL OF OUR PICKS

In the table above we give our picks and predictions for every fight. This is to help you put together teams in Fantasy MMA or enter Pick’em competitions. Please do not bet on all of these picks. You should only bet on our official VIP Betting Tips that you can find further down this page.

These picks and predictions are based on which fighters we perceive to have the best betting value. This doesn’t necessarily mean we think the fighter we pick has any notable advantage over their opponent.

The results of these picks are not tracked. We share them with the community because some members use them to enter Fantasy MMA and Pick’em competitions.

Rafael Dos Anjos was one of the many victims of USADA, and in some ways, you could say that Neil Magny was one of the beneficiaries. So what does that mean for this fight? How can we use our knowledge of what has happened in the last 18 months to make a profit on this matchup?

First, let us start by establishing what we know is true…

We know for a fact that Rafael Dos Anjos has declined significantly since the new USADA drug testing came into effect. We also know, based on his performance against Tarec Saffiedine that he still has the skills to compete against the best fighters in the world. The difference in Dos Anjos pre USADA and post USADA is that he now lacks the cardio and volume to compete at a high level for 15 minutes.

So what does that mean in this fight?

When we’re dealing with a fighter who has significantly declined since USADA came into effect, we have to disregard all their performances before January 2016 and focus solely on what we’ve seen since the new drug testing program has been around.

For this betting tip, I am basing my opinion solely on Rafael Dos Anjos’ performance against Tarec Saffiedine and his current career trajectory.

After spending a couple of hours researching this fight, I do believe that Dos Anjos is a good bet because I don’t believe that he has declined to the point where he can’t beat a guy like Neil Magny. He’s certainly not going to be winning a title anytime soon, but he’s still good enough to beat most guys ranked outside of the top 5 in the Welterweight division.

I don’t expect this to be an easy fight for Dos Anjos, but I do think he’s going to win. This is how I see the fight playing out…

Neil Magny is very good at being the hammer, but he’s not very good at being the nail, and if you establish dominance against him you can put him into a defensive shell very quickly. One of the things that Dos Anjos does well is that he punishes his opponent for entering striking range by uncorking massive body and leg kicks from the Southpaw stance. Magny has skinny legs and a thin torso. RDA’s devasting kicks will do a significant amount of damage, and more importantly, they’ll make Magny think twice before committing to a strike. This kind of dynamic and RDA’s ability to put Magny into a defensive shell should reduce Magny’s volume because he’ll be scared of getting countered with a huge, fight ending kick every time he tries to throw one of his lazy jabs.

The one, single most important reason why I believe Dos Anjos is a good bet can be found by going back and watching Magny’s last fight against Johny Hendricks. At this point, it is accepted by everyone that Hendricks is on a very steep decline and yet Magny was just seconds away from losing to Hendricks 30-27. If you go back and watch that fight, you’ll see that he was 20 seconds away from losing the 1st round until he caught Hendricks in a late triangle. He got dominated in the 2nd round and he was also very close to losing the 3rd round until he caught Hendricks in another late triangle.

Why is this significant?

This is significant because Magny’s takedown defense is non-existent and Dos Anjos’ reactive takedowns are excellent. Dos Anjos is also powerful from top position, and he is a high-level Brazilian Jiu Jitsu Black Belt. He is one of the few guys who was able to hang on the ground with Khabib Nurmagomedov.

For that reason, even in the face of Dos Anjos’ steep decline since USADA came into effect, I still believe that he will win this fight because he has the skills, fight IQ and heart to execute the same game plan that Johny Hendricks couldn’t quite see through till the end.

We also have to take into account the fact that Magny lacks the power in his hands to back people up and Dos Anjos is very good at pressuring his opponent’s from Boxing range. Magny’s 9-inch reach advantage isn’t going to be useful because Dos Anjos will fight his way into Boxing range and land significant damage.

This is one of those bets that I don’t entirely love because I’m not a fan of betting on aging Brazilians, but it’s also one of those bets where I do see definite value. Based on my research I feel that RDA should be closer to a 1.40 | -250 favorite, which means we’re getting a decent amount of value in the current odds. I don’t expect this bet to be an easy winner, but I do expect RDA to get it done and win 29-28 on all the scorecards.

Risk factors with betting on Rafael Dos Anjos to win...

The bookies believe that Rafael Dos Anjos has a 62% chance of beating Neil Magny based on their current odds.

We believe that Rafael Dos Anjos has a 70% chance of beating Neil Magny based on our extensive research and analysis.

I was initially planning to put Demetrious Johnson and Gavin Tucker into a parlay accumulator, but since Johnson vs Borg is now canceled, we’re going to bet Gavin Tucker straight instead.

Gavin Tucker is new to the UFC and we don’t know that much about him yet, but sometimes you can just tell that a fighter is going to be special from the way they move and the way they react to certain situations.

In the last 12 months, we’ve seen potential stars like Darren Till, Shane Burgos and Jimmie Rivera emerge out of nowhere and based on what I’ve seen so far I believe that Gavin Tucker could be the next big thing in the 145-pound division.

I am a big fan of Rick Glenn. He’s tough, he’s well rounded, and he always brings it, but there are different levels to this sport, and Gavin Tucker is several levels above Rick Glenn in every single aspect of MMA.

The deciding factor in this matchup will be Tucker’s speed and footwork. Glenn’s style of fighting is slow and plodding, while Tucker has the speed, cardio, and technique to dance around him all night.

Dominick Cruz and TJ Dillashaw have shown us that unorthodox footwork and movement can be incredibly effective in the lighter weight classes and I truly believe that Tucker is capable of breaking into the top 10 of the Featherweight division.

I’m very high on Gavin Tucker and with home advantage on his side, I think he’ll comfortably beat Rick Glenn.

Reasons for betting on Gavin Tucker to beat Rick Glenn...

Risk factors with betting on Gavin Tucker to win...

The bookies believe that Gavin Tucker has a 74% chance of beating Rick Glenn based on their current odds.

We believe that Gavin Tucker has an 80% chance of beating Rick Glenn based on our extensive research and analysis.

When Amanda Nunes and Valentina Shevchenko first fought back in 2016, we made a solid profit by betting on Nunes to win. This time around I recommend switching our pick and betting on Shevchenko to win instead.

After spending a couple of hours researching this fight, I feel confident that Shevchenko will win. If this were a 3 round fight, I’d probably lean more towards Nunes, but I believe it’s going to be difficult for Nunes to finish Shevchenko inside the distance and even more difficult for her to fight at a competitive pace for 25 minutes. It’s possible that Nunes could have improved her cardio since their first fight, but based on historical data it is highly unlikely.

I also feel that Valentina Shevchenko has improved significantly since their first fight. If you go back and watch that matchup, you will see that Shevchenko was comfortably controlling the striking exchanges and Nunes looked a little lost when the fight was standing. It was only when the fight went to the ground that Nunes was able to gain a significant edge. Since that fight Shevchenko has improved her ground game quite substantially, so I believe she’ll be a much tougher opponent for Nunes this time around.

My only criticisms of Shevchenko is that she is a very slow starter and she is also too accepting of bad positions. This could see her let some rounds slip away. This also means that Shevchenko could be an excellent Live Betting opportunity because she almost always loses the first round no matter who she is fighting…

At almost even money I believe that Shevchenko is a great bet.

Reasons for betting on Valentina Shevchenko to beat Amanda Nunes...

Risk factors with betting on Valentina Shevchenko to win...

The bookies believe that Valentina Shevchenko has a 55% chance of beating Amanda Nunes based on their current odds.

We believe that Valentina Shevchenko has a 70% chance of beating Amanda Nunes based on our extensive research and analysis.